“Thank you for your selfless actions aimed to make an invaluable impact on increasing the attractiveness, improving the image and orderliness in Pobiedna.” 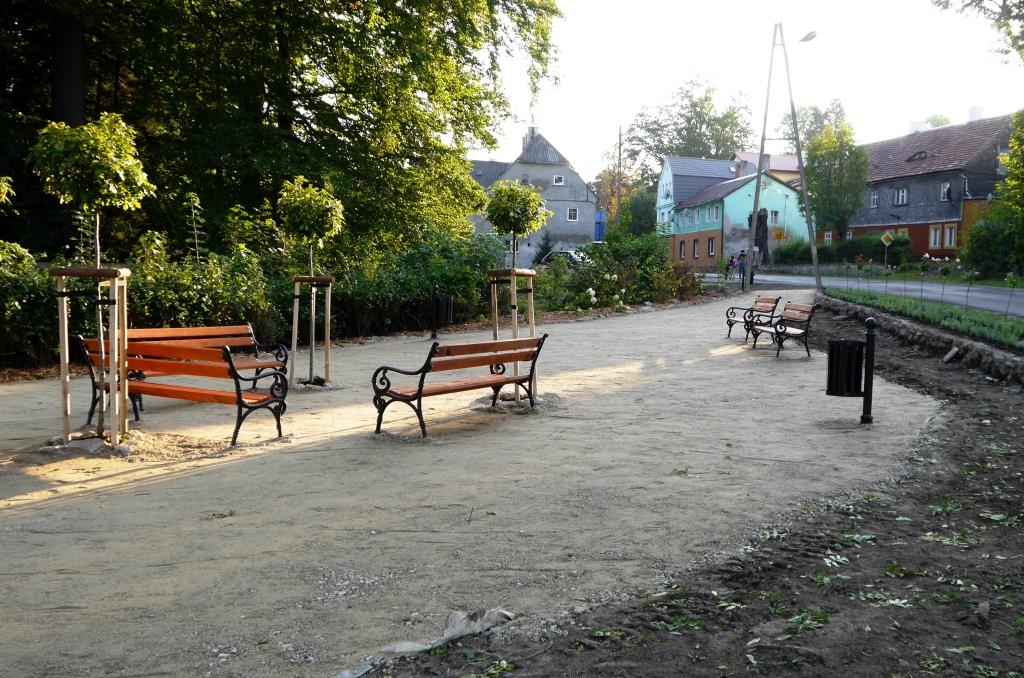 The initiative of the project to renew the bus station and its surrounding area came from the chairwoman of Pobiedna, who had expressed the need to the Polish Holosophic Society.

With the renovation of the bus shelter the year before, a first step had already been taken by the crew of Lighthouse Center® Poland (LCP), the centre where the main activities of the Polish Holosophic Society (PTH) are taking place. Read more about the bus shelter.

This year the next steps of landscaping the area around the bus stop could be accomplished in cooperation with the City Council of the bigger town Leśna, where the village Pobiedna belongs to.

The municipality contributed with new benches, rubbish bins and some financial support for a part of the needed gravel for the pathways. Together with a Polish neighbour, who was doing the excavator work, the LCP crew was able to do the job. 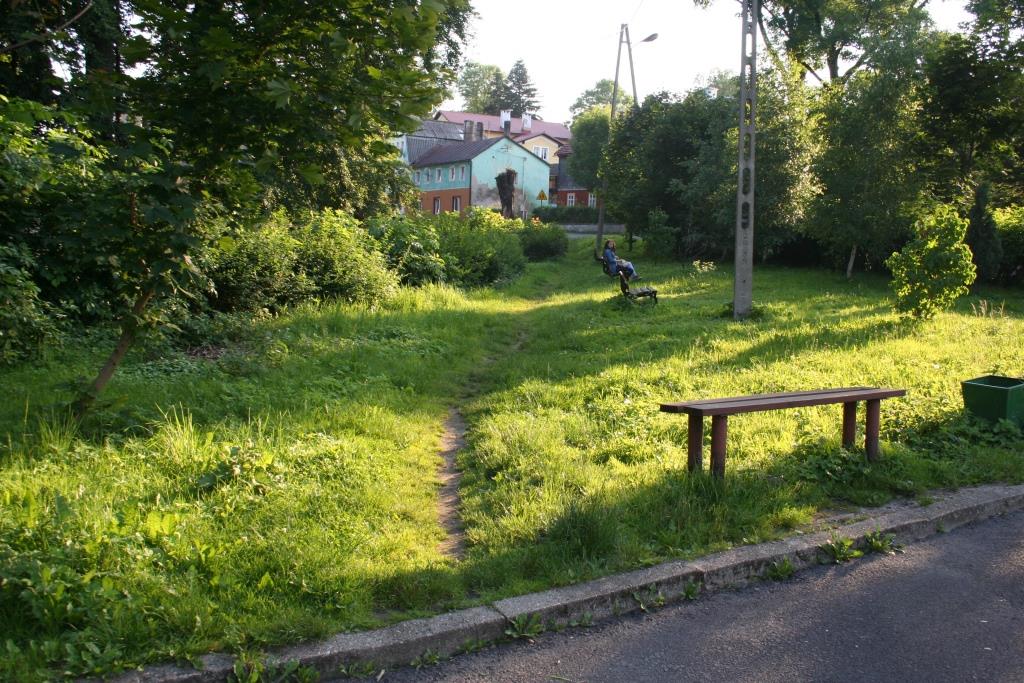 Before the start of the landscaping there were just overgrown bushes and big grass areas at the bus station. Except for a narrow trail there were no real pathways, and it was certainly no pleasure to walk through the mud on rainy days. 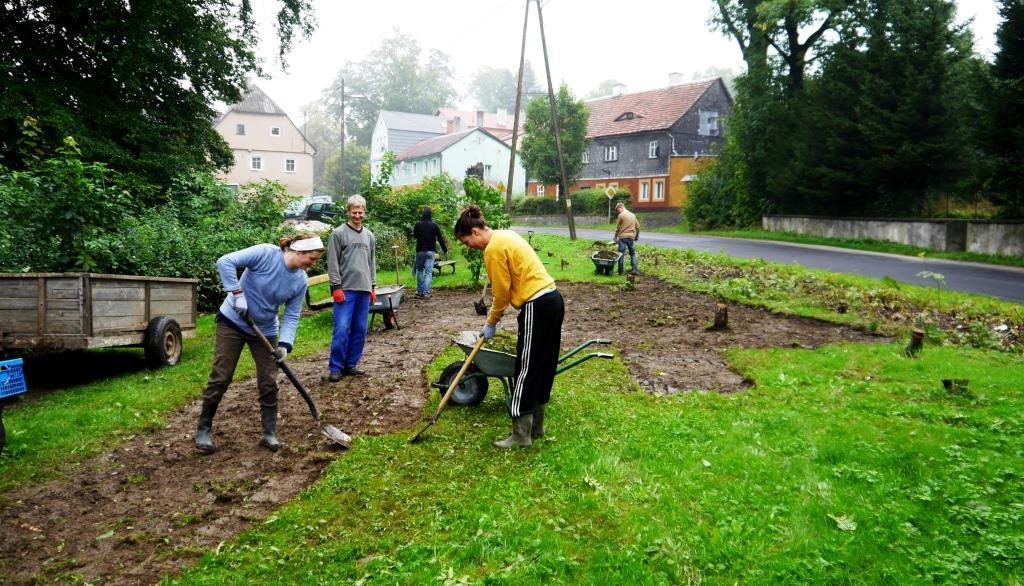 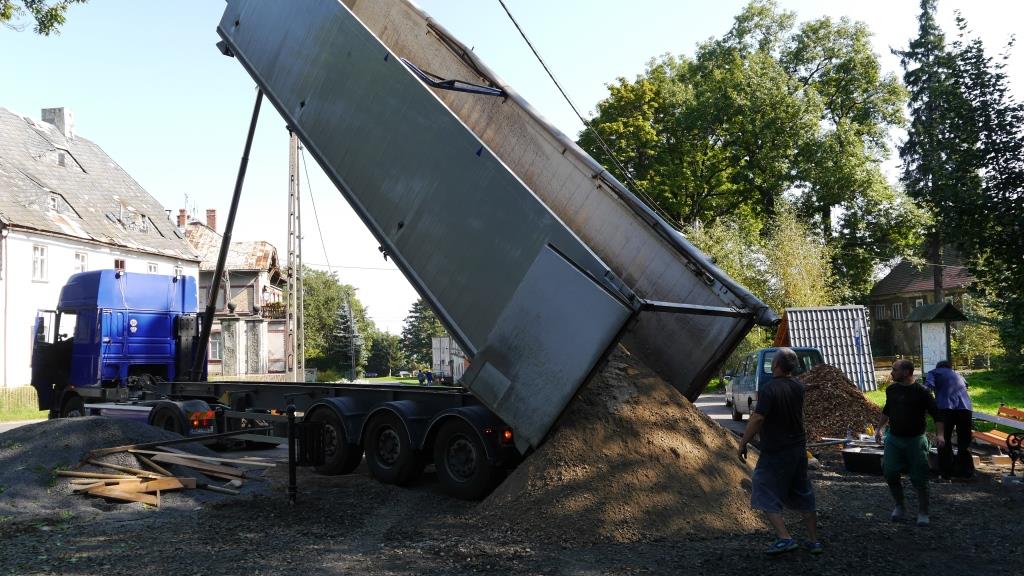 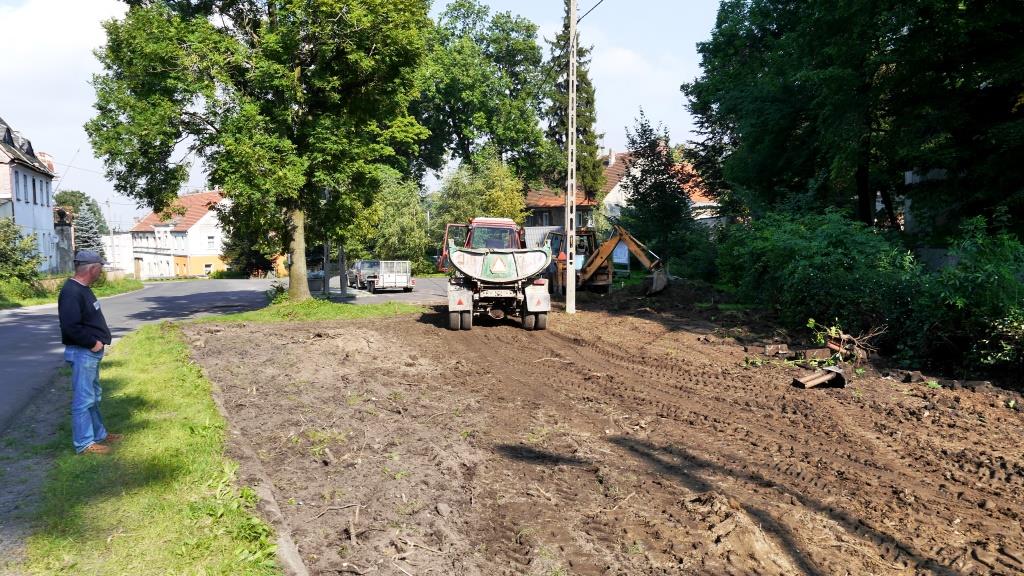 After taking off the grass sods by hand, the excavator worked the ground and we were able to put in the drainages. 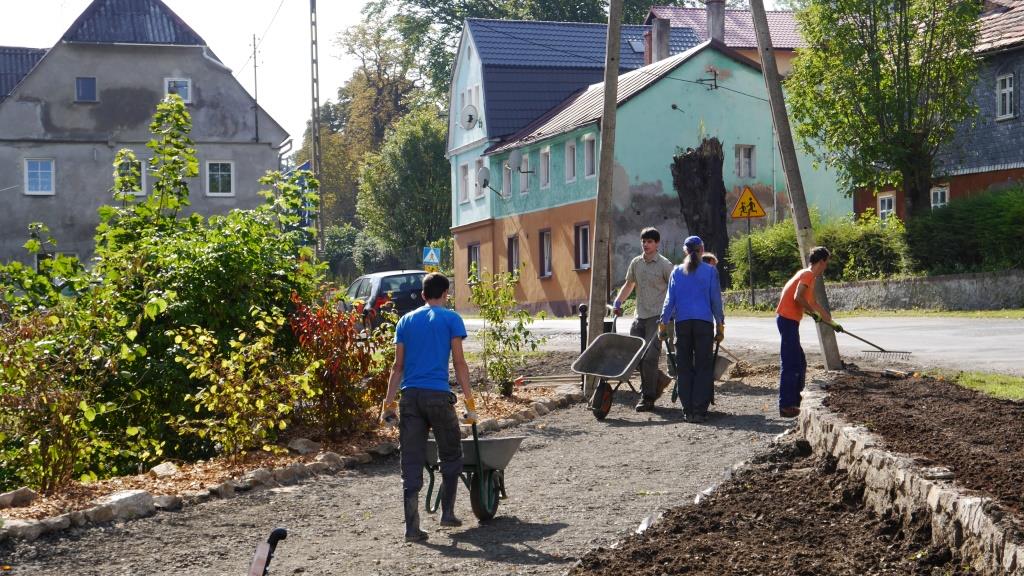 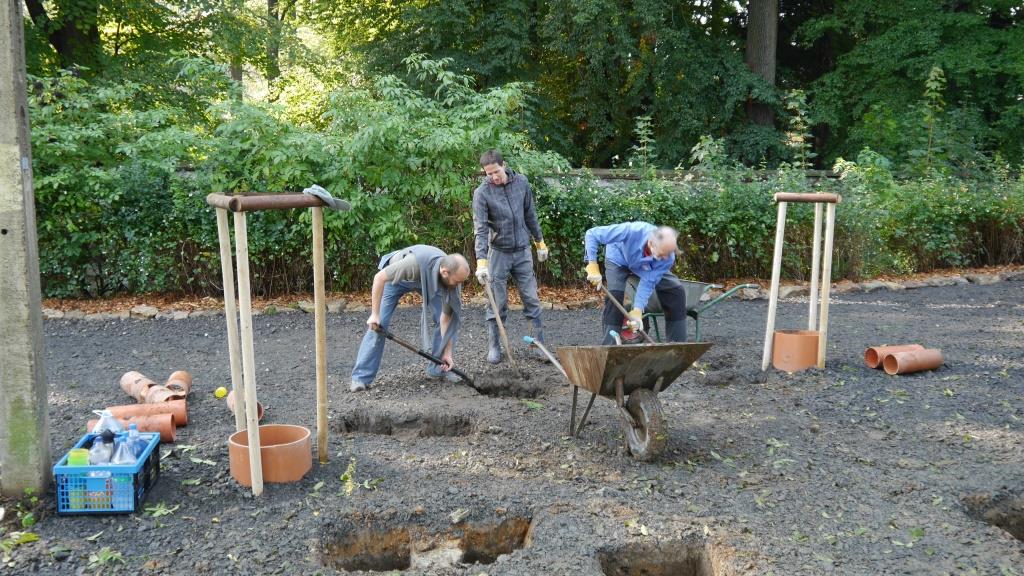 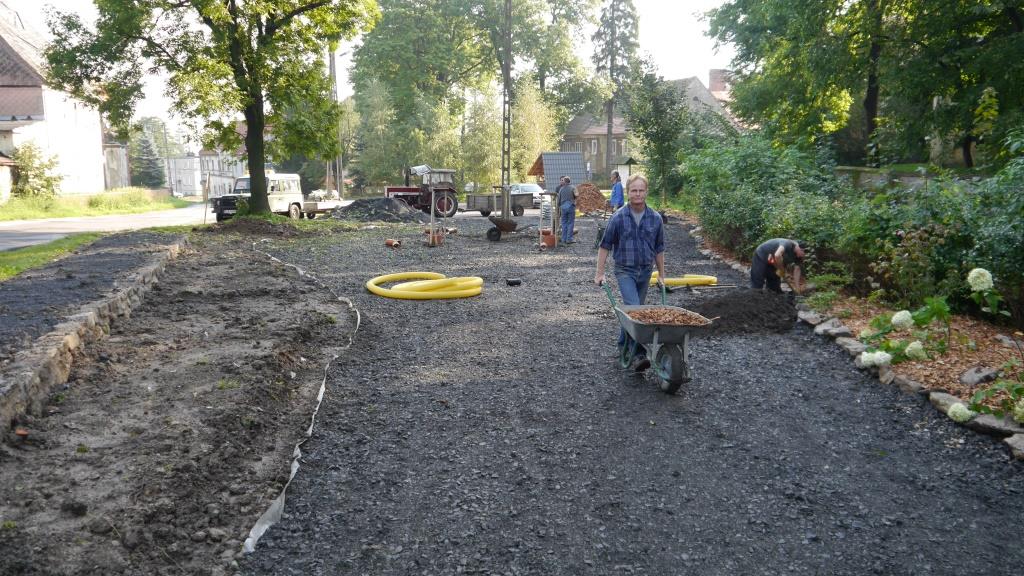 Then the pathways could be filled with gravel to provide a steady walking surface, which also remains passable on rainy days. An area with new trees and benches was created and new bushes were planted and mulched with wood chips. 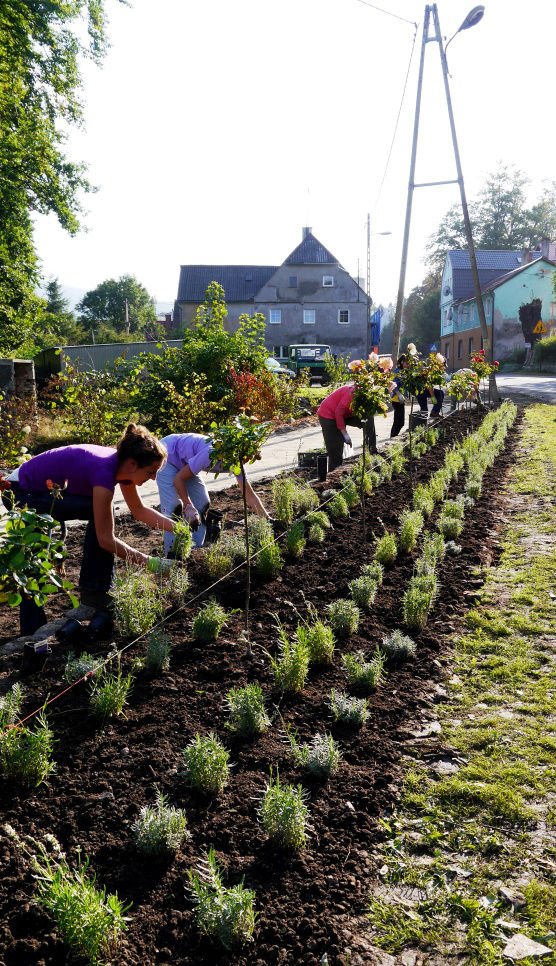 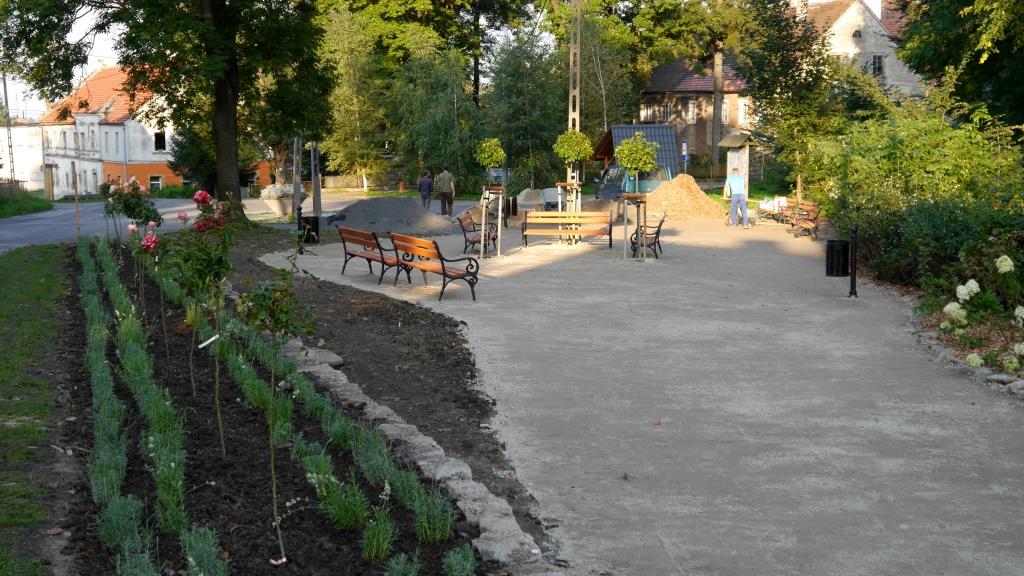 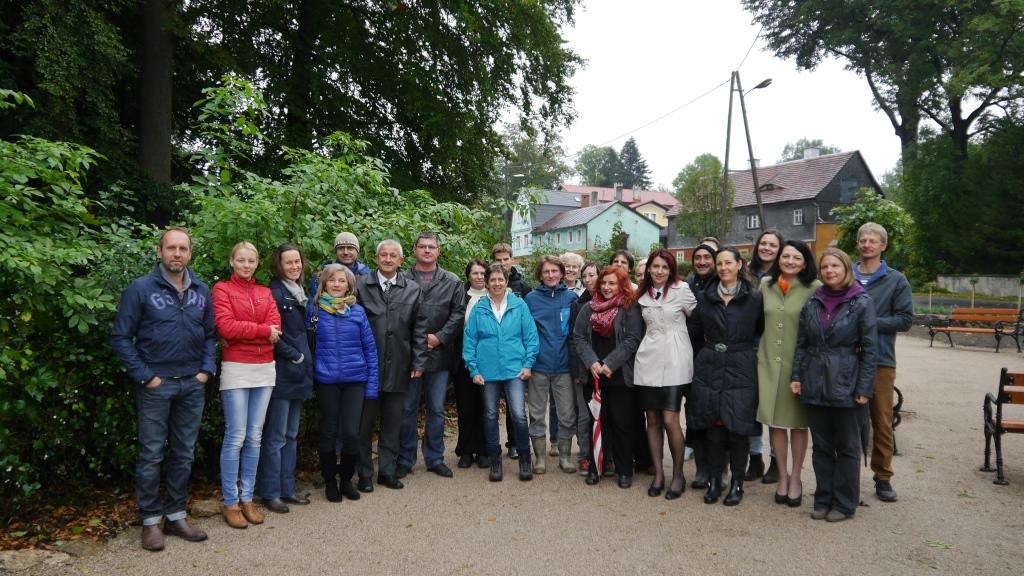 A stone wall was built for a new flower bed where lavender and roses were planted. Then a new layer of white stones was placed on top of the gravel.  For about one month people of the different nationalities joined together with the LCP crew for these group actions, especially bigger groups from Austria and the Czech Republic took part in the project. 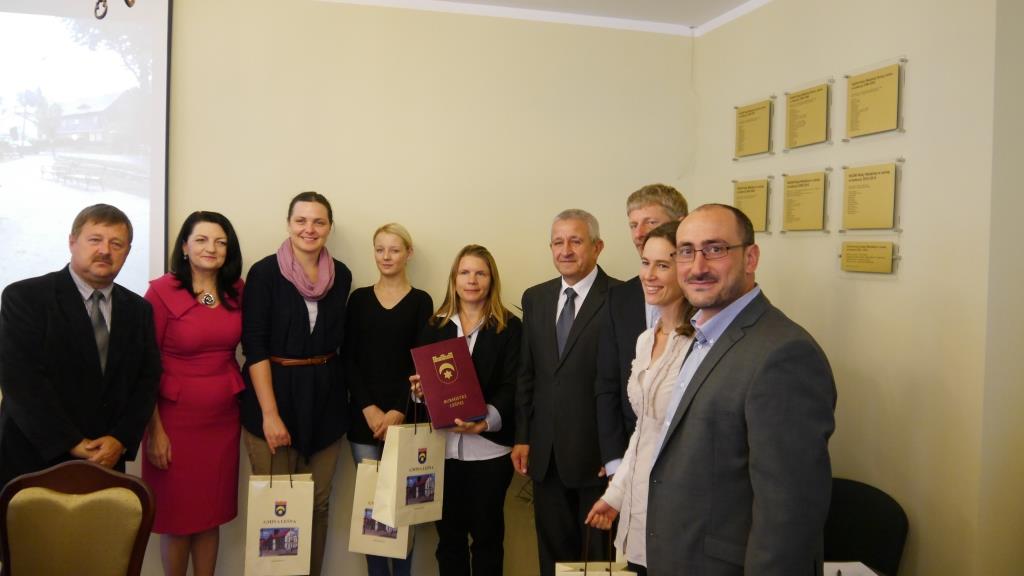 As a sign of gratitude the LCP crew was invited to the board meeting at the City Council in Lesna, where the Major of Lesna himself, Jan Surowiec presented the bus station project in a photo slideshow to the other board members. In his speech he said that he hoped that the other people would be inspired by this project, because if everybody took care of the environment, everything would look nicer.

“… It is an example for the others. We would like that other citizens and people are “infected” by such actions… I believe that the seed we sowed will bear its fruits…There was no public movement or major organised help, PTH did the works almost on their own. This is one example of the activities of PTH in Pobiedna. In the past there were big projects like building the playground in the center of the village and making the wooden house for the bus station. There has also been cooperation with the local school and also with our Gmina. The Gmina cooperated with PTH in connection with the snowfence and PTH takes care of putting up and down the fence every year.”

Also the sołtys of Pobiedna (village leader) Anna Hałas expressed her appreciation for the work of PTH.

“Members of this international association have been supporting the society of Pobiedna for more than a dozen years. There have been various activities, from charity projects such as wood delivery to families in need or giving away clothes, to the construction of a playground for children or painting a school façade. I wish every sołtys just half of such a group as I have in Pobiedna”
Excerpt from Website of the city of Luban

Thanks to
Polskie Towarzystwo Holozoficzne

for the work associated with the modernization of the square at the bus stop in Pobiedna.

Thank you for your selfless actions aimed to make an invaluable impact on increasing the attractiveness, improving the image and orderliness in Pobiedna.
With gratitude for the big heart and good will, we wish you success in the implementation of plans in life and professional success.

Translation of  thank you letter from the Mayor in Lesna